What makes a great product?

A few years ago I founded a startup, but our original idea failed to get traction.

We had to pivot. We needed ideas.

One of of our advisors drew this on a white board. It’s been etched in my memory since. 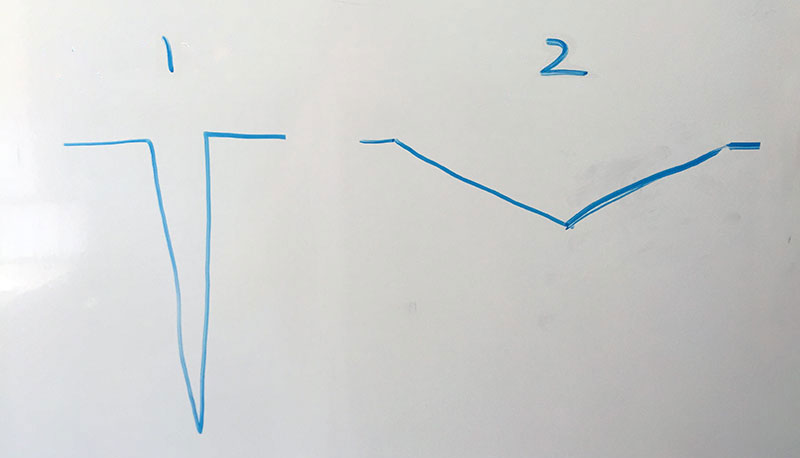 The depth of the hole (Y-axis) represents how much your users need and love your product.

The width of the hole (X-axis) represents the number of people who may find your product useful.

The most attractive ideas fall into the 2nd category. But it’s a trap.

But early startups don’t have the time or money to execute well on big ideas.

I learned this the hard way. We decided to pivot to building an email client to compete with Gmail. Our advantage was that we’d use machine-learning to automatically categorize your email (this was before Priority Inbox). We spent months building our our machine-learning system plus hundreds of features that people expected all email clients to have.

The first version of the product sucked. The email client we built wasn’t good enough for even us, the founders, to use ourselves. I still used Apple Mail and my co-founder used Gmail.

The idea was exciting to work on because it had the potential to reach a huge, wide market, but the usefulness of the early product was too shallow for it to pick up any momentum.

Build products that only a few people LOVE

We should have started smaller. Instead of building a new email client, we could have built a Gmail plugin that added one feature that a small number of people would find extremely useful. This is in line with what Rapportive and Streak has done.

It’s almost always best to start by building a product that a small number of people will find incredibly useful. Your goal should be to build something that users won’t be able to live without, even if YOU are the only user.

If you’re able to build something that one or two other people truly can’t live without, you know you’re moving in the right direction.

Start by building features, not companies

Y combinator is sometimes criticized for funding “features” instead of “companies”. But if you look back at the most successful companies today, many of them started out as something far smaller than they are now.

The famous example is Microsoft’s first product, Altair Basic. The market size was tiny. Their users were mostly computer hobbyists. But the few users they had, loved it.

If you’re able to build something that a small number of people really love, there’s almost always a way to carve out a larger market for your product by adding features or marketing the product in a new way, as Microsoft has done.

This is why so many great ideas start out as small side projects. With a side project, there’s no question of whether the market for your idea is big enough. It doesn’t matter because it’s just a side project (for now).

How to grow a tiny idea into a big business

Your tiny idea is at Point A, and you’re swinging for Point Z (amazing product that reaches a wide market).

Before you can get from Point A to Point Z, you have to traverse the entire alphabet. Each subsequent letter is 2x larger than the previous one.

Growing this way will be slow at first because the absolute numbers are so small. But this is how exponential growth begins.

Here’s an example. Let’s say your SaaS startup has just $100 of monthly revenue. Here’s what happens if you double your revenue every month.

The time to double may be longer than 1 month, but this gives you an idea of how powerful exponential growth is.

Instead of thinking “How to I get from Point A to Point Z”, first think about how you will get to point B.

Growing 2x today is a lot easier than shooting for 100x growth in 3 months. Thinking this way allows you to gradually evolve and expand your product over time.

Instead of attempting to leapfrog a tiny idea into to a huge one, take small steps that exponentially increase the reach of your product over time.